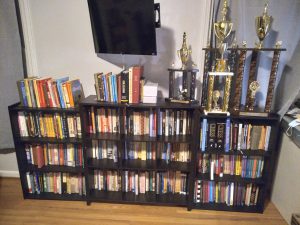 One of the services HRCA offers its members is a free library of chess books that can be checked out for study!  Almost all of our hundreds of volumes were donated to our library, with the largest donation coming in the summer of 2021 in memory of an avid chess player and Life member of US Chess, Ralph Dean Cole***.

HRCA strongly recommends that players of every age take time away from training with computers and dive into chess books.  Check out this article about the world’s youngest Grandmaster “Abhi” Mishra and how he used books over computers to reach his goal!

“Despite being a player belonging to a generation nursed on computers, a heavy diet of chess books formed his early learning tool. He’d done strengths and weaknesses analysis of “Silman’s Complete Endgame Course” by age 6.”

Our library catalog is available online HERE.  You can search for a particular title, author, or topic, such as openings, endgames, etc.  Once you have selected your books, simply contact us to arrange for pickup.  The books will be checked out to you for up to one month and may be extended as long as they are not on hold for another member.  No more than 10 books can be checked out at one time.  Members who lose or damage books will be responsible for replacement costs.  Many of our titles are chess “antiques” and out of print, so please treat them with great care!

Ralph was born September 23,1954.
He was the son of Charlie and Gladys Cole of Paynesville WV. He had three brothers and four sisters, a very close and loving family.

Ralph attended school in Iaeger, WV.
Calvin, Ralph’s older brother, introduced him to playing chess. They would play every evening after school.  When Ralph attended Iaeger

high school, he was taken in  by Mr. Connie Bowles, a guidance counselor at Iaeger High. Ralph’s interest in chess prompted Mr. Bowles
to start a chess club for  the school and other surrounding schools.
The boys were known as the Cole brothers. Ralph and his brother Calvin, Troy and Roy West were
unbeatable and were # 1 of all schools in McDowell County.In 1971,  Iaeger High School was invited to the Greenbrier Invitational. Ralph was in the 10th grade. Calvin was now in the 12th grade.
Also, the brothers Troy and Roy West attended. Mr. Bowles was ecstatic when the boys won the first place Trophy for Iaeger High school.
Ralph and Calvin attended the county championship. They won first place. A few years later, Ralph’s younger brothers Bobby and Andy also
won the County Championship.
Ralph was in the 12th grade when he attended the West Virginia State Chess Tournament. The top player there chose to play Ralph. The onlookers
made a comment, “You just made a big mistake. You can’t beat Ralph Cole,” and he didn’t. Ralph checkmated him in a few moves.
Ralph and Calvin were  both able to beat their Counselor in a Chess game. This made Mr. Bowles very proud of them.
In later years after Calvin moved to Indiana, Ralph and Calvin played Chess over the phone. They would make a couple of moves, then days
later they would continue their game. At this time, you had to pay for long distance calling.
Ralph taught his  younger brothers to play chess; also the nieces and nephews were excited to learn. They had a great respect for their uncle Ralph.
Ralph played chess at East Tennessee and won his game. At a later time the four Cole brothers Ralph, Calvin, Bob and Andy played a
tournament in Johnson City Tennessee ( The Round Robin ). The boys won their games and then played each other, culminating in a draw.
Ralph later sponsored a Chess Tournament in Cromwell , Indiana.
The ( DD Burkett ). He recruited players from Michigan City, Fort Wayne, Indiana and West Lafayette Indiana.
Ralph played chess at  East Tennessee University and had a big win. He continued to play chess online and kept his ratings up by playing
top rated opponents.
Ralph was a lifetime member of the USCF, The United States Chess Federation. He had a 2,000 expert rating.
Ralph was a WV State Champion and a Florida State Champion.Ralph passed away unexpectedly Feb 07, 2021. He leaves his wife Wendy, stepson Yanni, and grandchildren and his brothers and sisters
to mourn his loss.